The Australian economy remains in a difficult period as the mining boom unwinds. Non-mining activity has bounced back but is far from strong enough to offset the headwinds coming from the mining downturn. This note looks at the outlook for growth, interest rates, profits and what it means for investors.

June quarter growth was anaemic at just 0.2% quarter on quarter or 2% year on year. 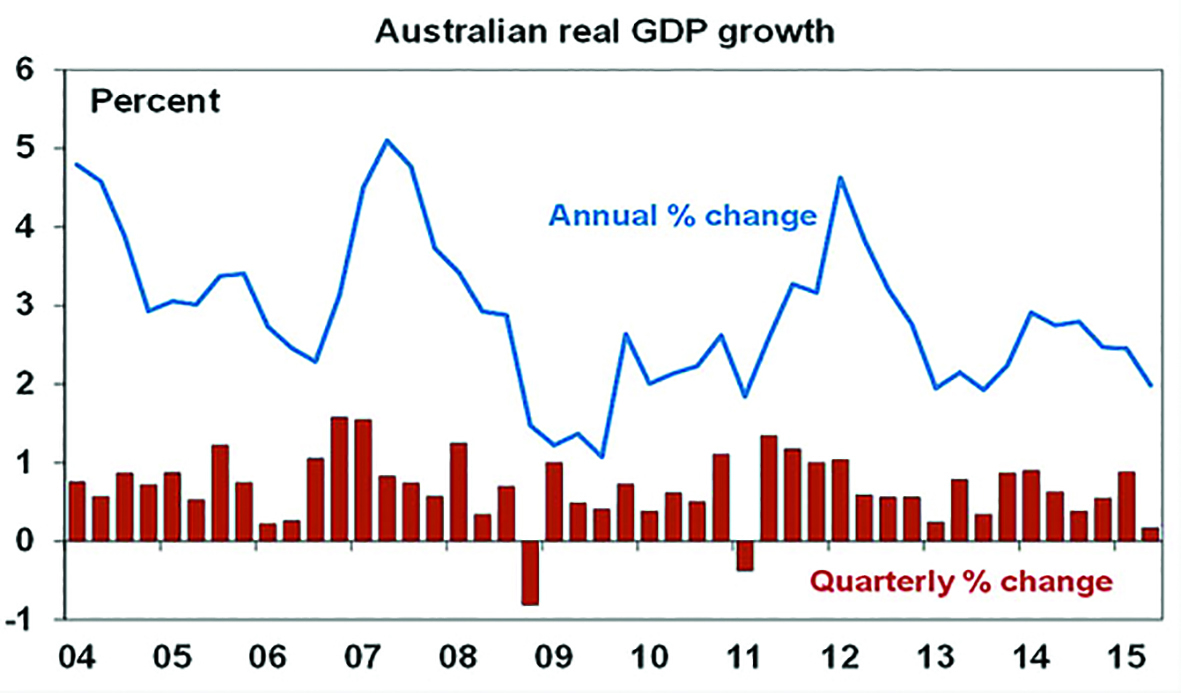 Were it not for a strong surge in public spending and a (likely temporary) bounce in investment in WA, June quarter growth would likely have been negative as consumer spending was soft, housing investment fell, underlying business investment was soft and net exports and inventories cut 0.6% points and 0.2% points from growth respectively.

The growth detraction from net exports and inventories seen in the June quarter is payback for positive March quarter contributions and unlikely to be repeated in the current quarter, allowing growth to bounce back a bit to around 0.5% quarter on quarter, which is the average of the last two quarters.

However, this will not alter the tough position Australian now finds itself in. Mining investment, having risen from around 2% of GDP to 6%, is now falling back rapidly as large projects complete. This is detracting around 1 percentage point from growth per annum. To offset this we need to see growth in other parts of the economy pick up. We have seen housing and consumer spending springing back to life and improvement in tourism and higher education. However, non-mining investment remains disappointing. 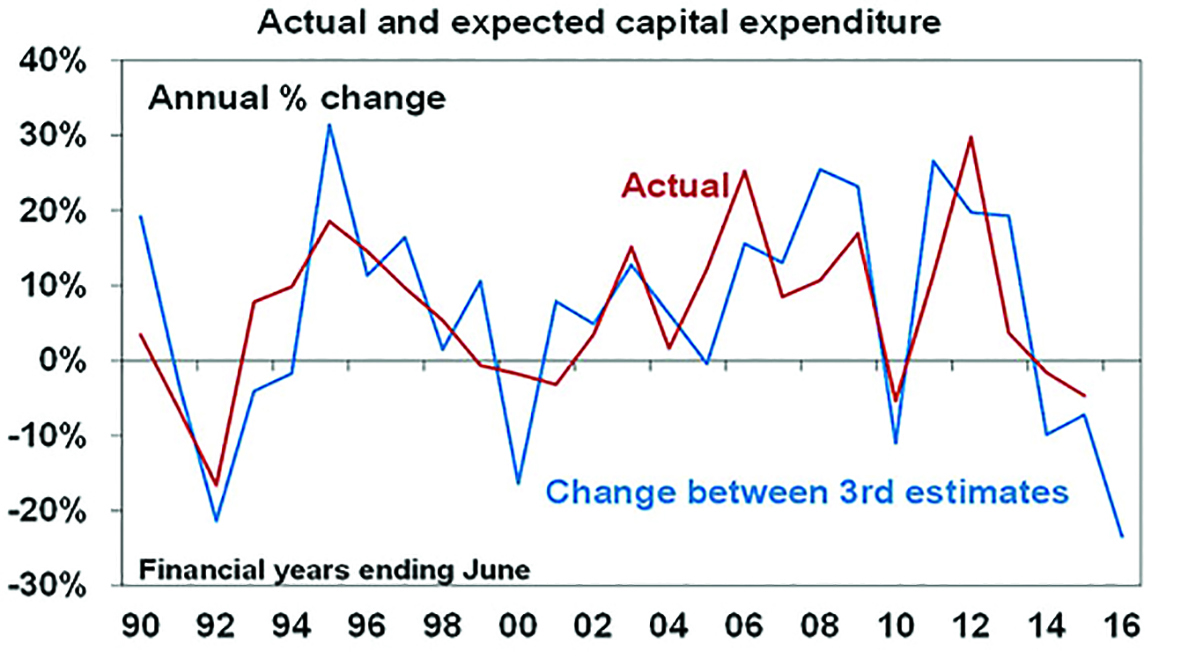 While slumping mining investment is no surprise what is concerning is that the outlook for non-mining investment remains weak pointing to a 7.5% decline this financial year. More broadly, several other factors seem to be playing a role in sub-par growth in the economy, including: steeper than expected falls in commodity prices that continue to cut into national income growth (nominal GDP growth was just 1.6% year on year through last year); the ongoing threat of more budget austerity; household reluctance to take on more debt; delays in the fall in the $A (just over a year ago it was still around $US0.95); and subdued levels of confidence.

But there are several reasons not to get too negative.

This should mean the risk of a recession remains relatively low and there is no reason to get overly gloomy on Australia. Rather growth is likely to continue to remain sub-par at around 2% as the negatives and positives balance out.

However, with the mining downturn having at least another two years to run the prospect of another few years of growth running well below potential is not appealing. While potential growth in the Australian economy may have slowed to around 2.75% thanks to slowing productivity and population growth, actual growth is running well below this at around 2%. This means spare capacity in the economy will continue to build, with a rising trend in unemployment and downwards pressure on inflation. What’s more, housing construction which has helped the economy looks to be at or close to peaking. Against this backdrop the economy is likely to need more help.

First, the combination of an extended period of below potential growth, a rising trend in unemployment and weak inflation is likely to ultimately drive the RBA to cut interest rates again. A slowing in Sydney and Melbourne home price growth (as APRA measures bite) should make it easier for the RBA to do this. The November RBA meeting is the next one to watch, failing that then expect a move early next year. While in an ideal world it would be good to see more of focus on economic reforms to drive stronger growth, the political reality means that this will be hard to achieve any time soon.

Second, the $A looks headed to around $US0.60. The primary driver is the ongoing secular bear market in commodity prices but the likelihood of a further narrowing in the interest rate differential versus the US adds to the case. This will be a typical overshoot in the value of the $A, but it’s necessary to help drive increased demand in non-mining industries like tourism and manufacturing and in turn help drive up non-mining investment.

Profits disappointing, but good outside resources

The recently completed profit reporting season was a good reflection of the state of the economy. 2014-15 profits were weak overall with June half results being a little disappointing. 43% of companies beat expectations and 59% saw their profits rise from a year ago which is okay, but it’s well down on what we saw in the last few reporting seasons. 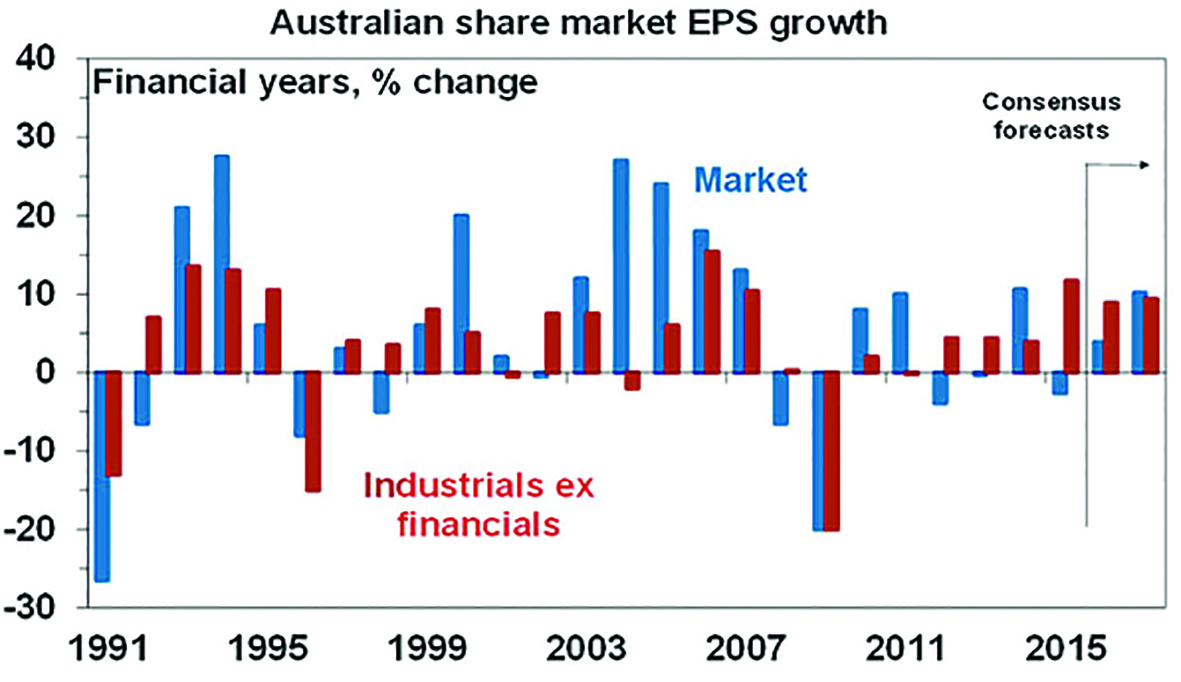 Consensus earnings growth expectations for 2015-16 remain soft at around 4%, driven by industrials ex financials with profit growth of 8.5% more than offsetting another 6% expected decline in resources profits. Low interest rates and the falling $A should help industrial profits.

Are high dividend payouts to blame for weak capex?

A common view is that companies are not investing because shareholders are demanding high dividends. This may be playing a role but it’s likely to be minor. Contrary to popular perception the dividend payout ratio (ie dividends relative to earnings) is not significantly out of line with its historic norm. For industrials the payout ratio at around 70% is around where it was prior to the GFC. It’s mainly resources stocks that have boosted payouts to around 70% from around 30-40% prior to the GFC) and it’s hard to argue they should ramp up investment after having over invested! 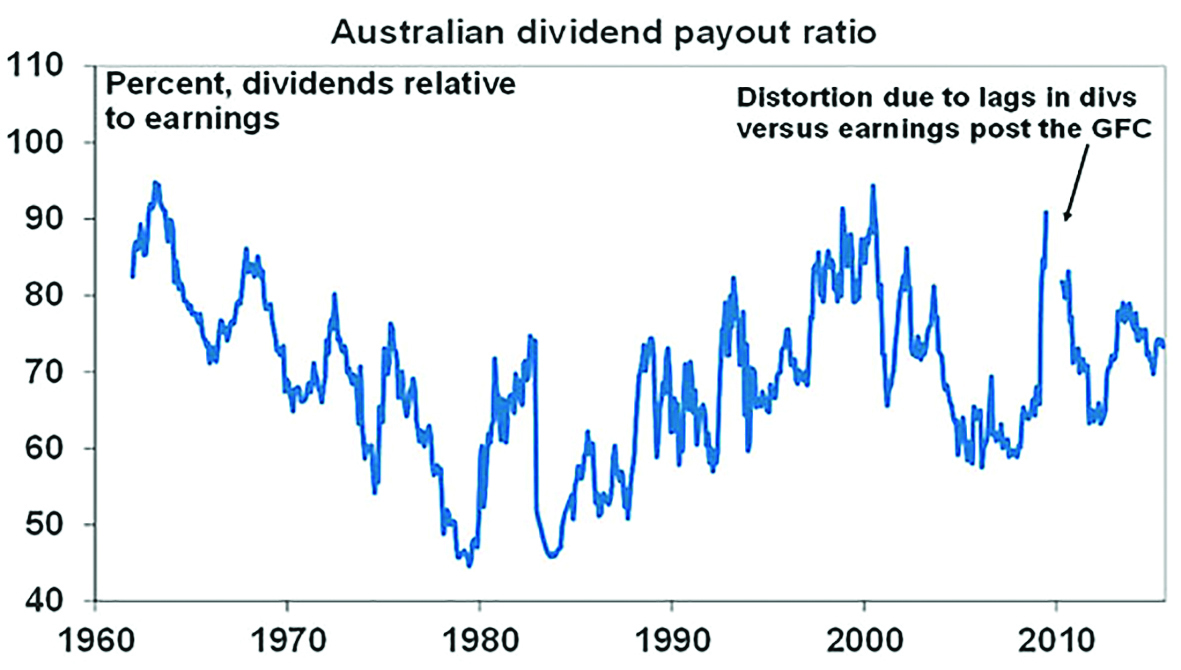 The real reasons for the lack of investment by non-mining companies is likely to be post GFC caution, wariness after getting smashed through the mining boom by the high $A, high interest rates and high labour costs (just four years ago now) and too high hurdle rates for a low inflation world.

First, bank term deposit rates are likely remain low or fall even further. The search for decent income flows has further to run.

Third, Australian economic growth is likely to disappoint relative to expectations for the US and Europe, suggesting a case to maintain a greater exposure to traditional global shares even though we expect Australian shares to end the year much higher than they are now.